A downloadable game for Windows, macOS, and Android

Spirit's Embrace is a commercial fantasy game with themes revolving around angels, demons and death currently in development. The game will retail for $15 when it's released. Pre-orders are open at a discounted price of $10. The game will have 2 optional main characters and 8 different endings.

You wake up in Purgatory, a place between worlds, between Heaven and Hell. You have no memory of who you were and how you got here. You only know your name. To find out the truth about your past (and if you're dead or still alive) you have to go on a dangerous quest. There are 3 places you'll have to visit: Heaven, Hell and Earth. Along the way you'll meet demons, angels, lost souls and even Death himself. 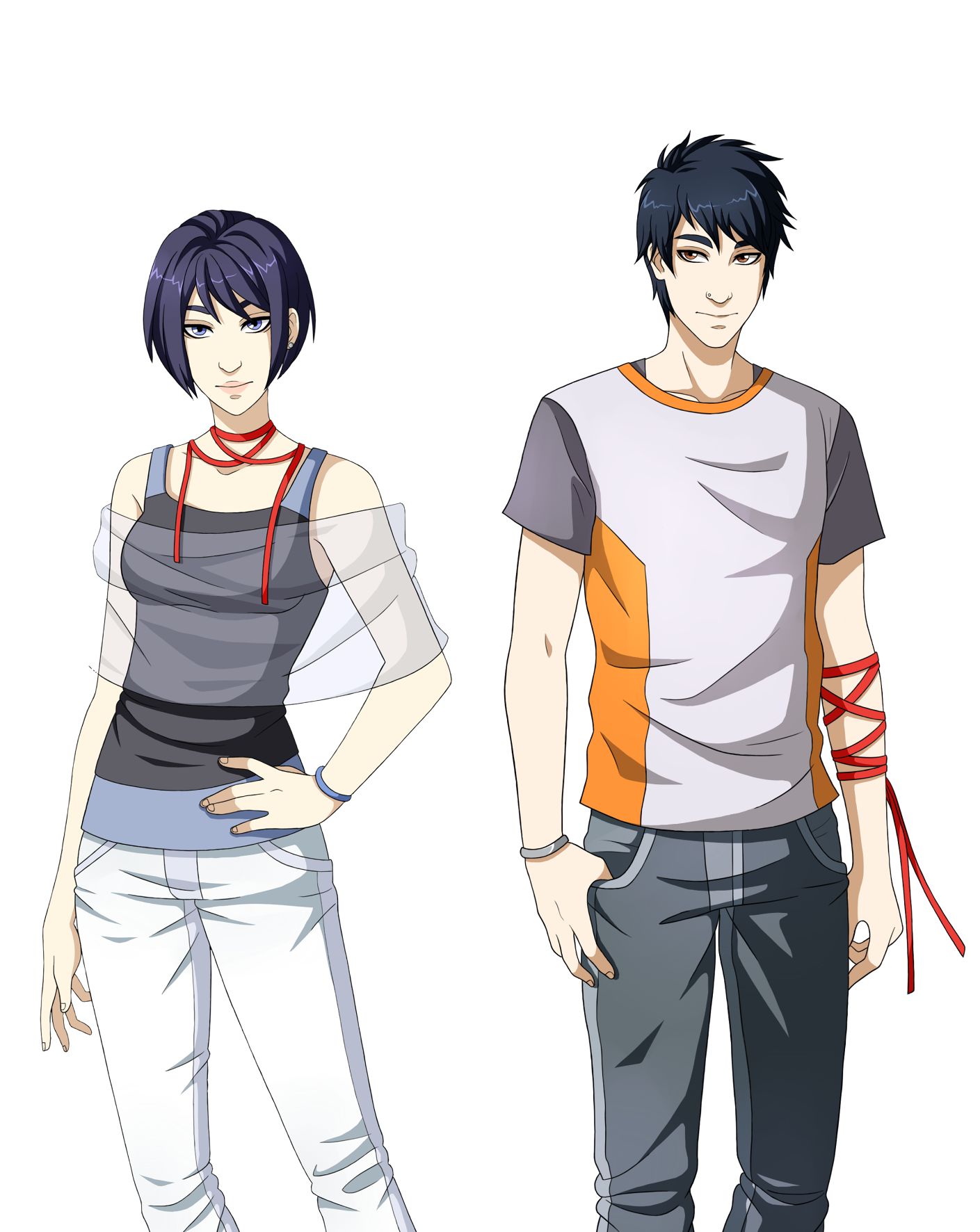 The player can choose between a female heroine (Rin) or male hero (Teo). The names will be editable.

Our heroes are bound to each other in a way that can only be determined by the player. Their stories are different but connected by fate. 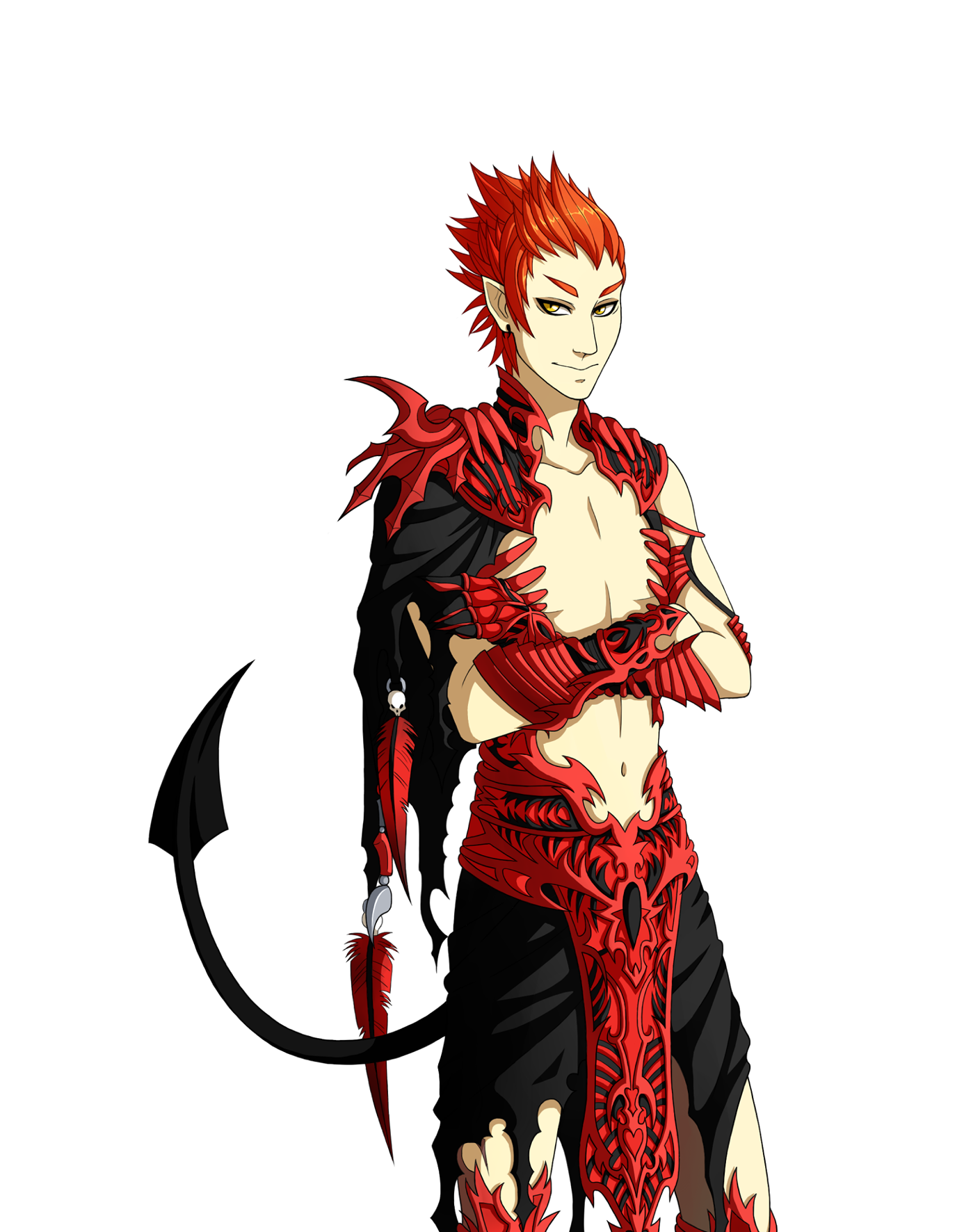 A demon temporarily residing in purgatory, devious and mischievous. Beliah likes to bully the guardians of the gateway between the worlds - a portal called by the name Zarithar. He’s especially fond of the angel Mikael with who he’s been in conflict since ancient times. He serves as the right hand of Shadow Master - the king of demons. Despite his evil attitude Beliah also has a gentle side to him. 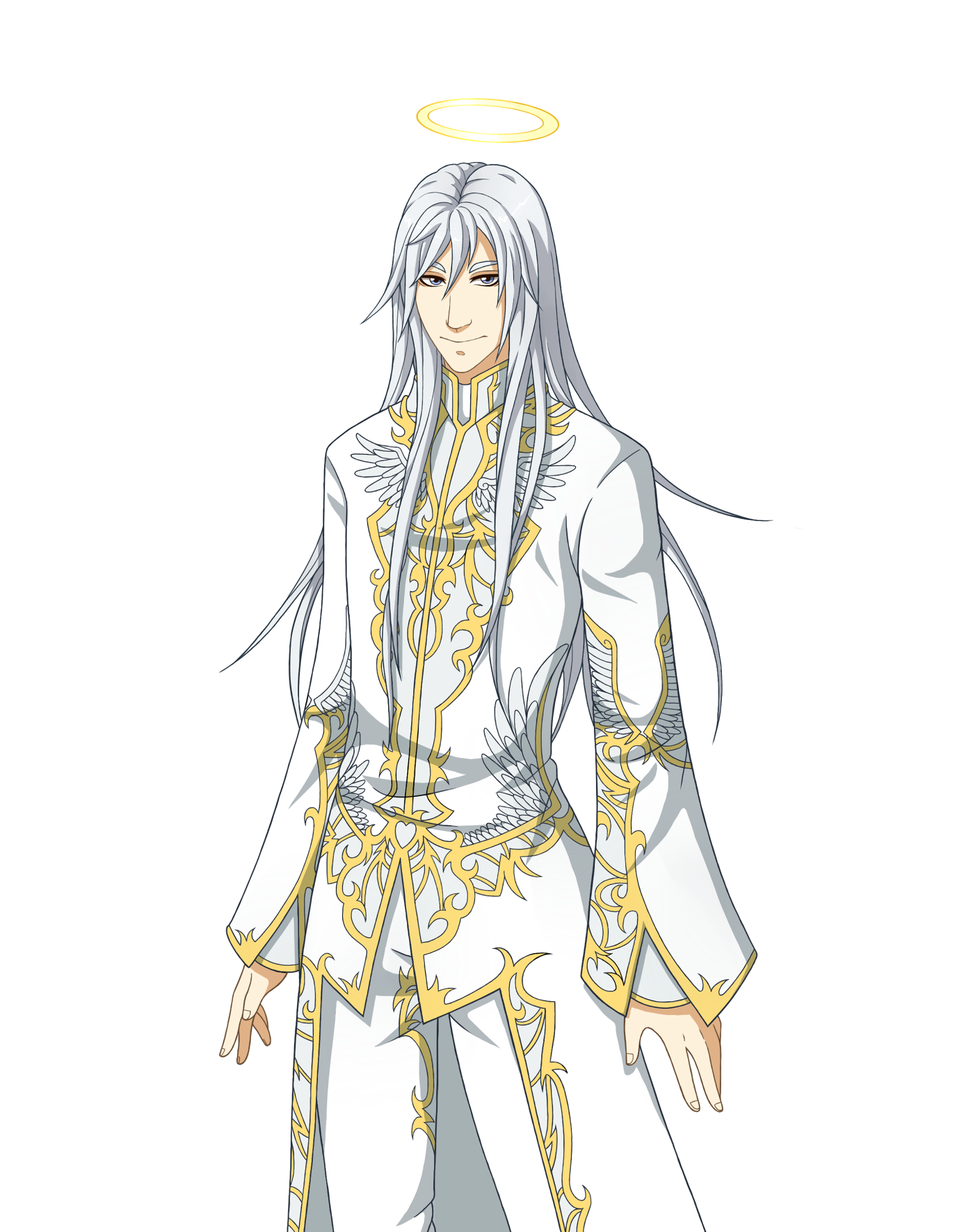 An angel guarding the gateway between the worlds. Loyal and committed to his job. Mikael is very caring and innocent but also naive and easy to control. He often has to put up with the pranks of his rival Beliah. His favorite color is white and he often wears white clothing. He doesn’t understand cruelty and violence. He empathises with humans and their struggle to survive. Seeing how our hero/heroine ends up with amnesia Mikael decides to help regain the lost memories.

Lord of the Skies 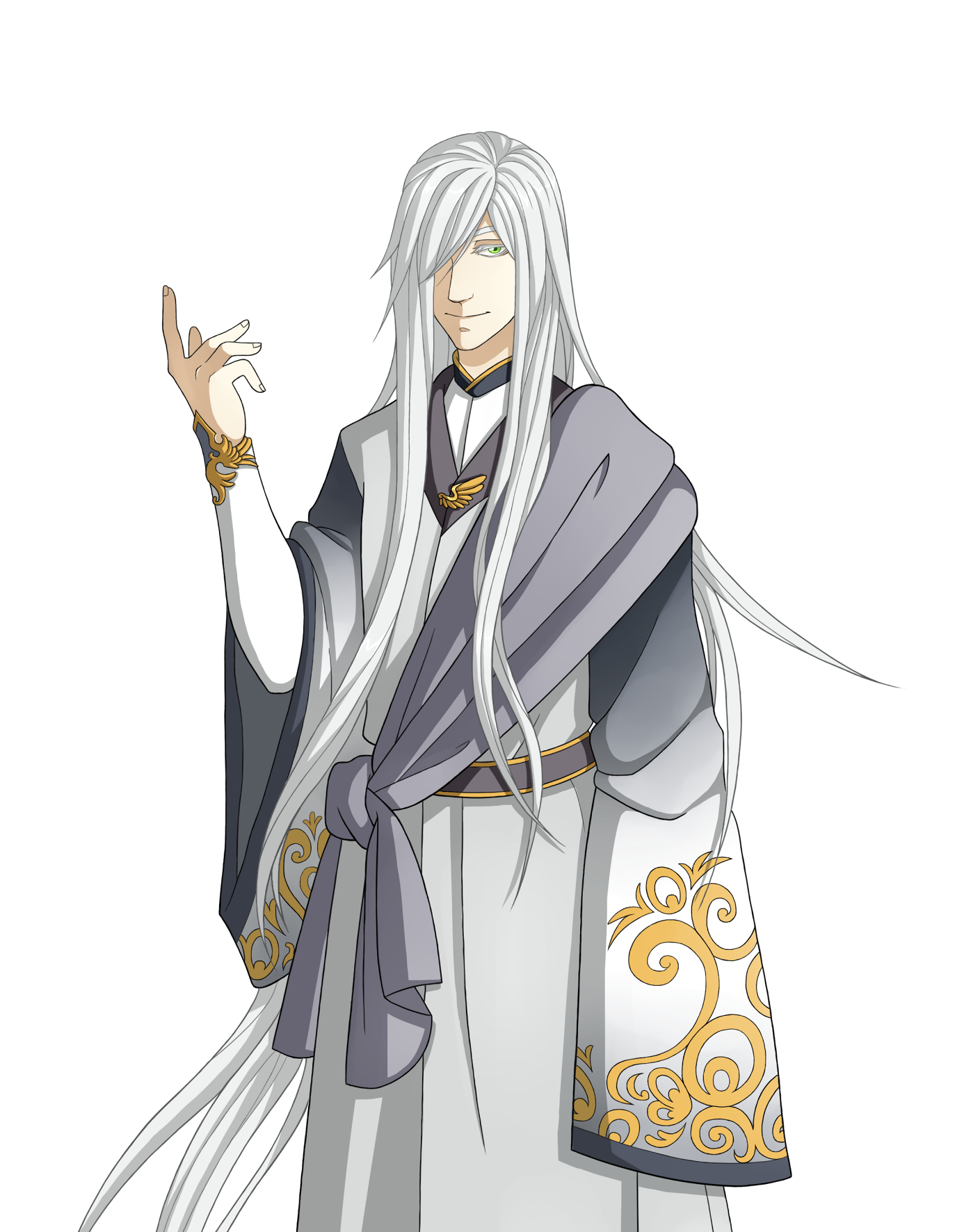 The personification of God. He’s the Father of all beings and things. Although he’s been thought to be very old his appearance shows a young lad with long silver hair. Lord of the Skies has a very calm and gentle personality but there’s a cloud of mystery surrounding him. No one knows where he is most of the time and what he’s been doing there. One thing remains certain though, he likes peanut butter and jelly sandwiches. 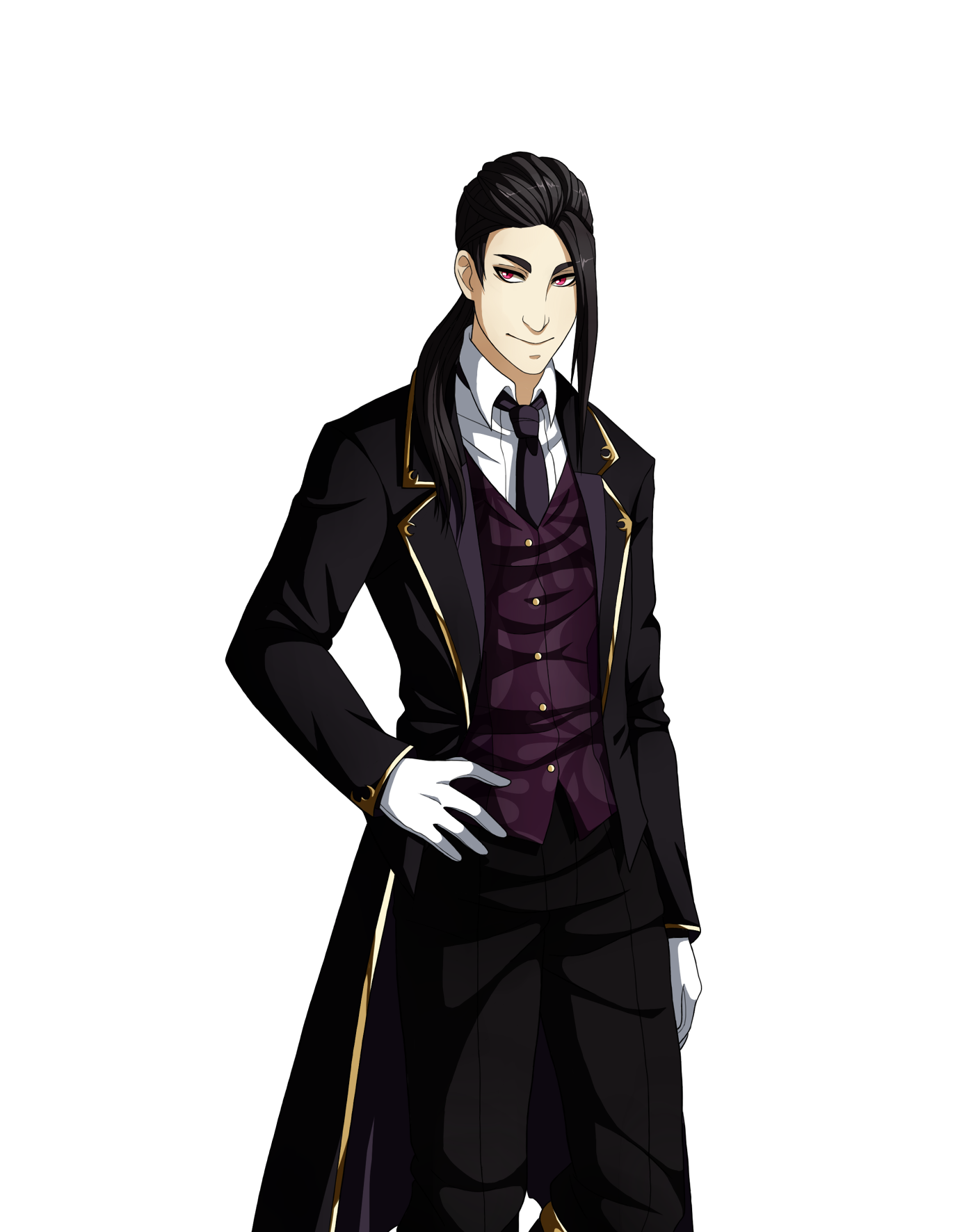 The personification of Satan, the lord of evil. He’s the master of deception and lies. He presents himself as a very elegant man around his 30-ties. The Master of shadows likes to play games (often on his PGS) and keeps a diary. He plans plots on how to take over Heaven and he trusts no one besides Beliah - his Right Hand. 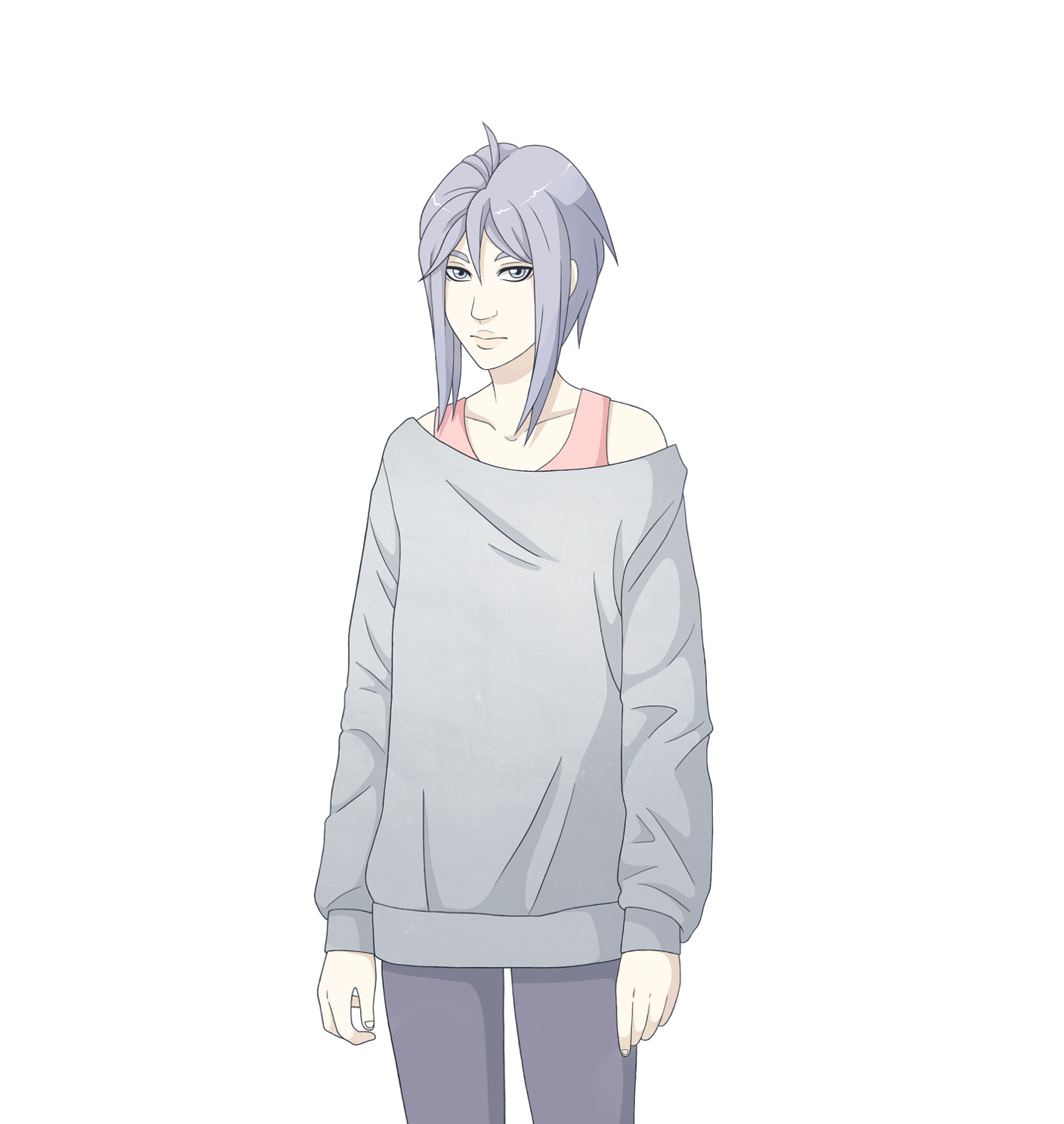 The soul of a teenage girl, trying to escape Death. Lucy had a very difficult life. Her parents were never around and so she had to do everything by herself. She learned to be independent but in result lost her childhood. From her earliest years she’s been constantly bullied by the neighborhood kids. She learned to deal with her haters and planned a revenge in her late years but never got the chance to act upon it. 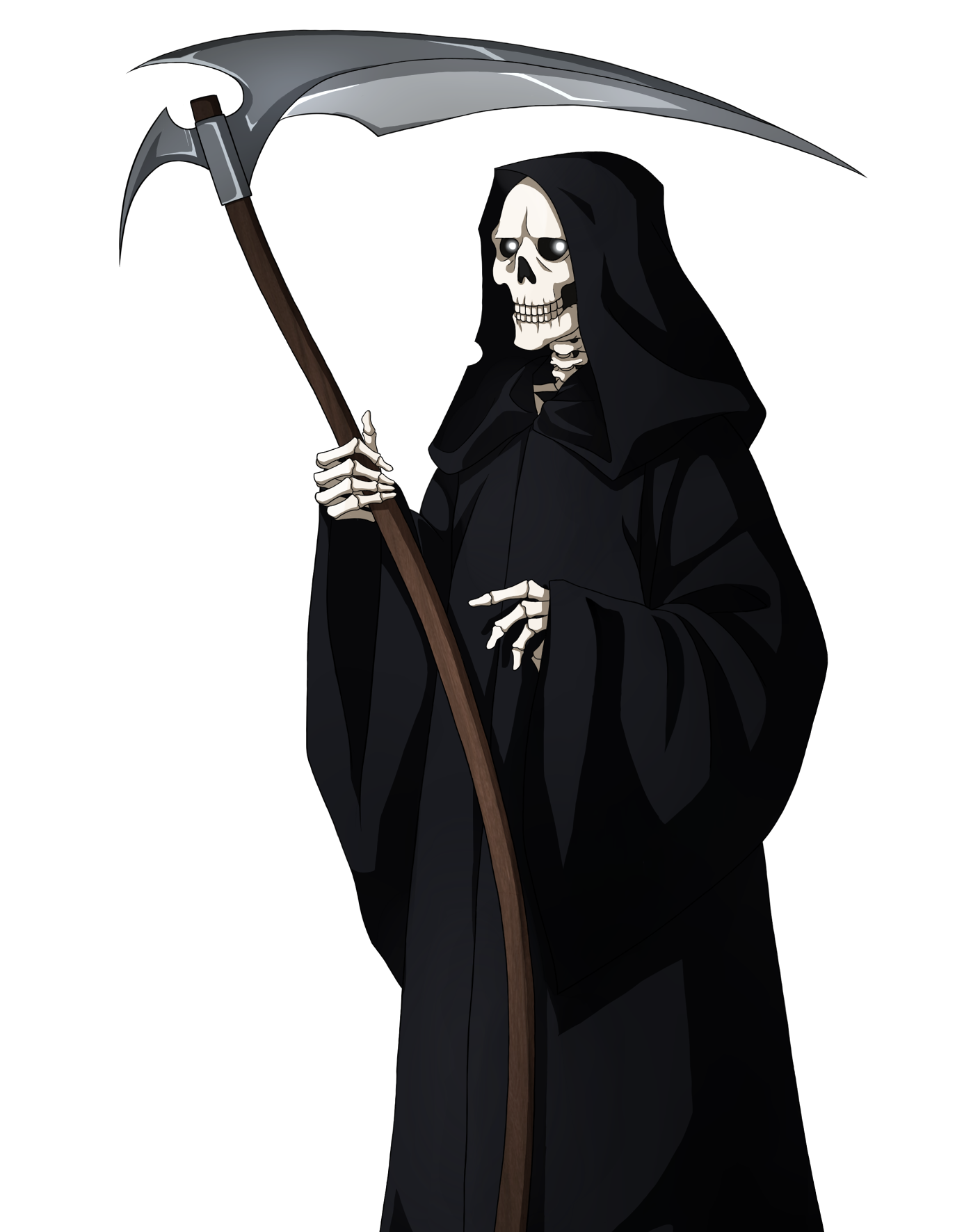 Death is mysterious and lacks  humor. His job is to collect souls from Earth and take them upon the judgment place where it’s decided if they will be placed either in Heaven or Hell. He’s looking for a soul of a young girl named Lucy who is constantly hiding from him. 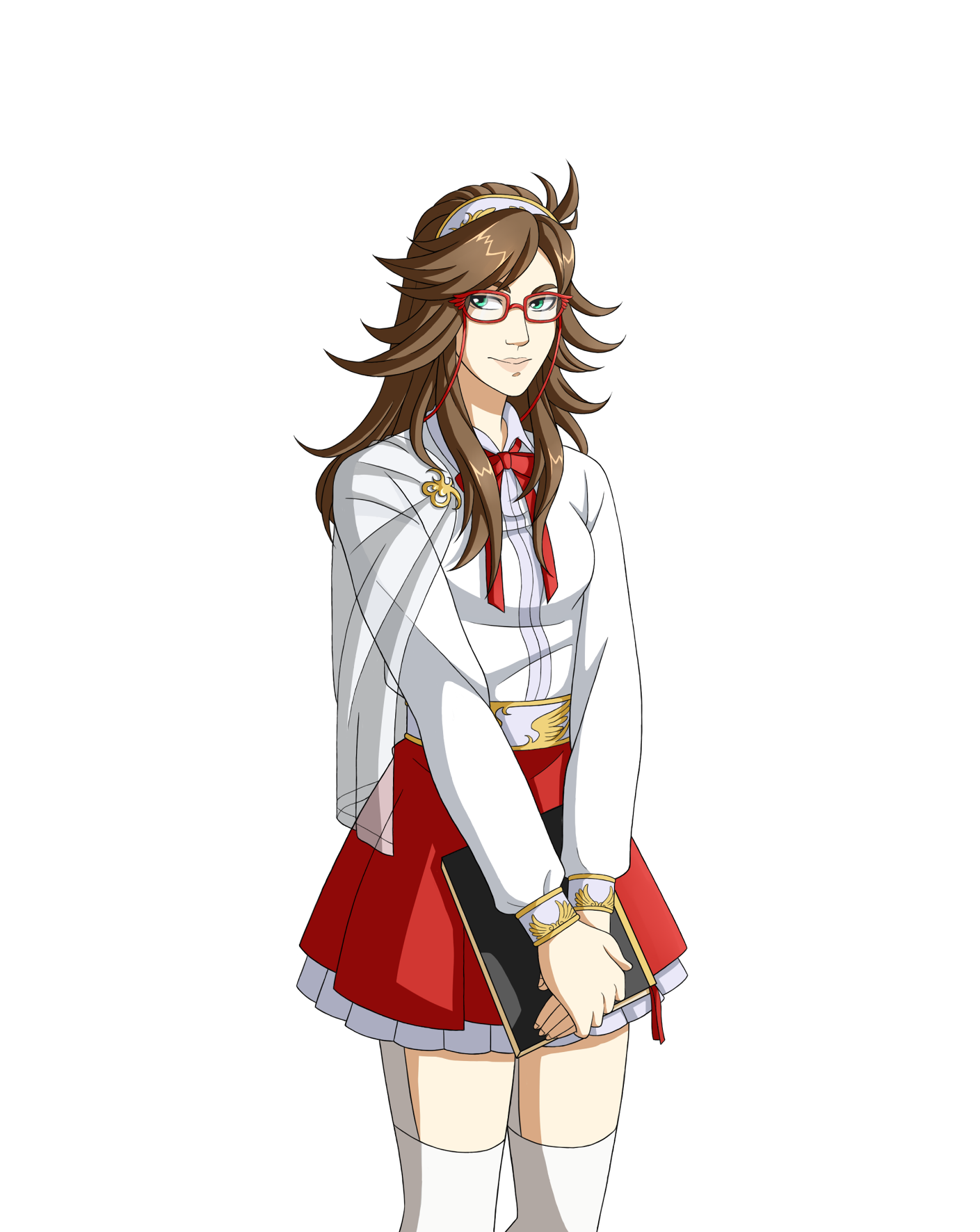 The bookkeeper of the Lord of the Skies. Florianna is very nice, friendly and intelligent. She writes down which souls are going to Heaven and which to Hell. She also makes appointments for the Lord. 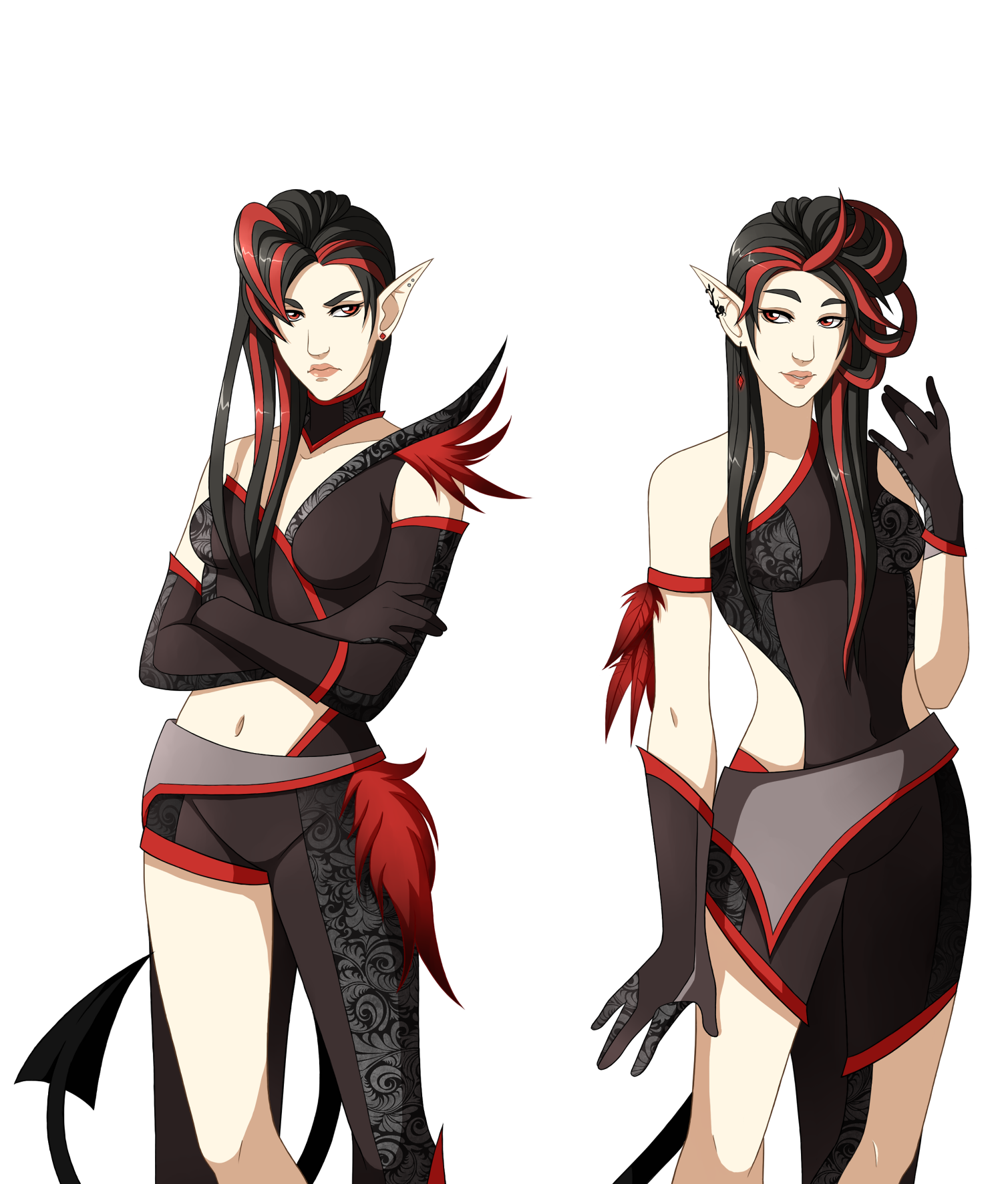 Twins with opposing characters. Sin is mean and sarcastic while Ister stays cheerful and full of optimism (not very demonish after all). The sisters constantly fight and deny each other’s right. They love jewelry and all kinds of expensive accessories (even though they rarely wear them). 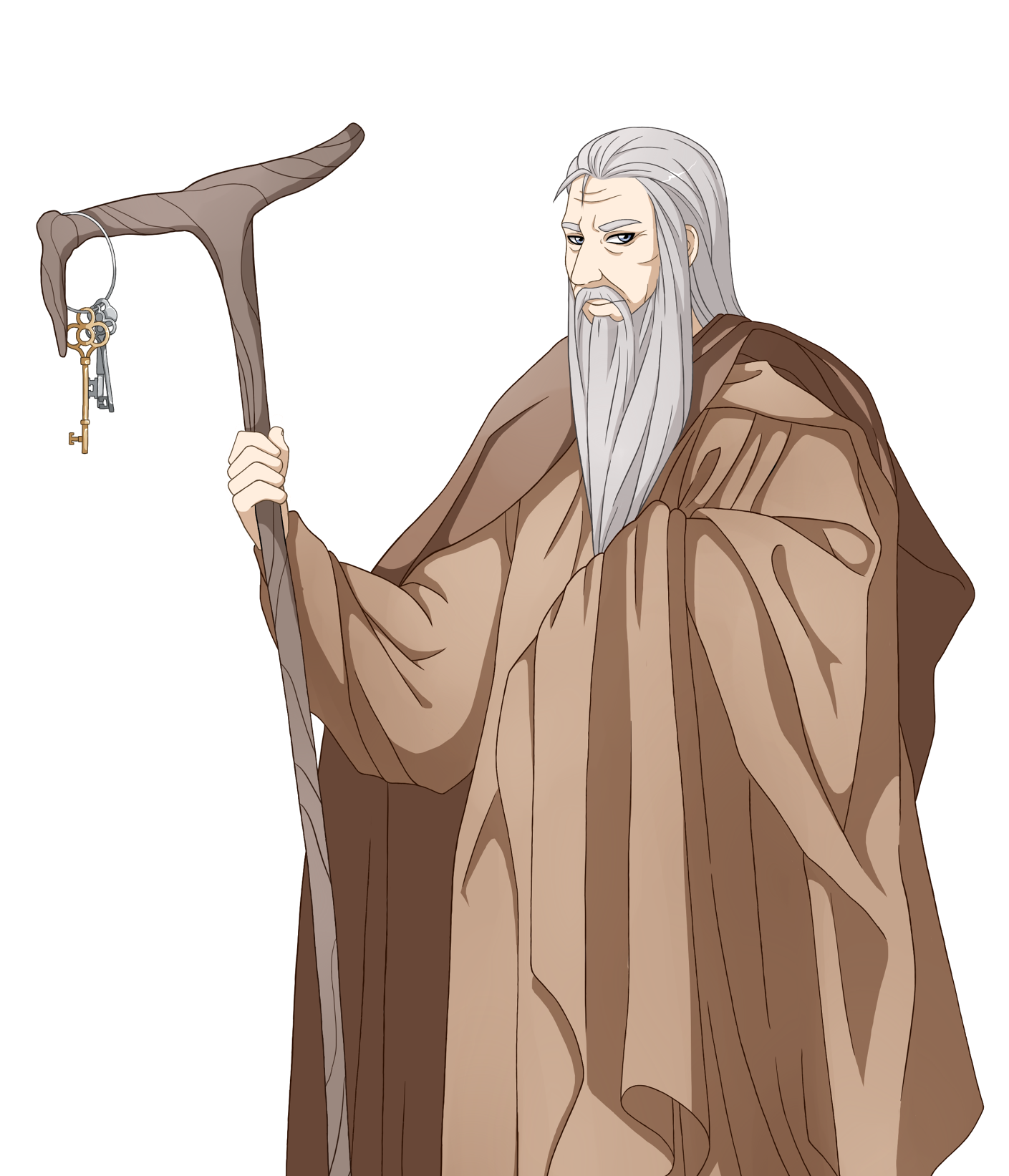 The Guardian of the Heaven’s Gate. He’s an old man who guards the passage to Heaven allowing only those with special permission to pass. Saint Peter is a very quiet person. He keeps all kind of keys and only he knows what the keys open. 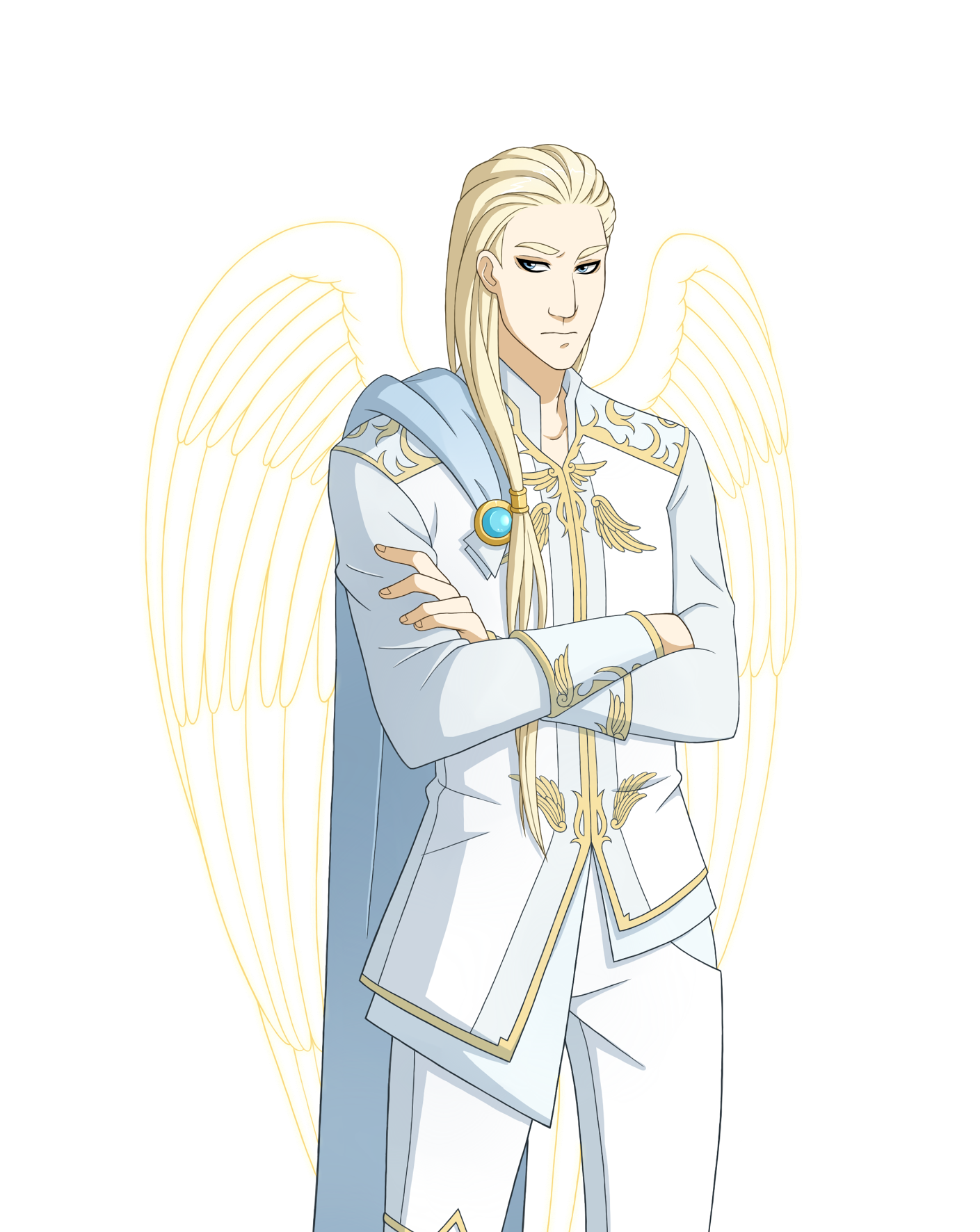 An archangel supervising Mikael. He is always busy with work and rarely has any time to spare. Gabriel has a patronizing look and a well-shaped body, makes him look like a bodyguard of Heaven. 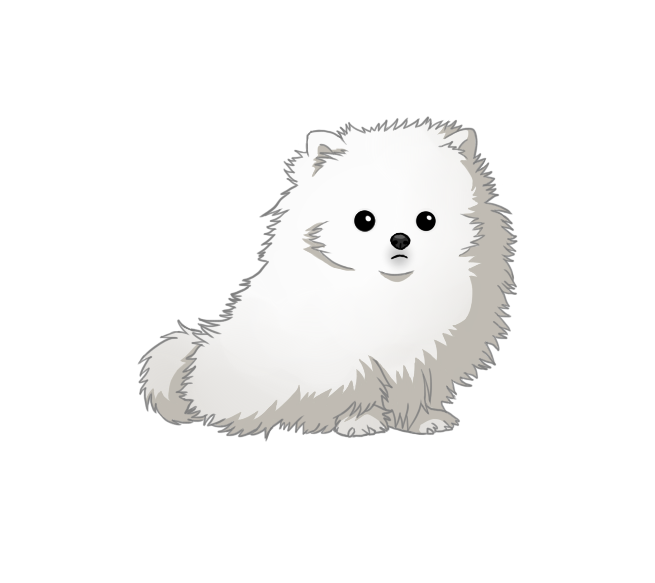 The diabolical Shadow Master’s dog. A gift from Lord of the Skies. Fluffy has a dark side, once made hungry he turns into a huge beast with a huge appetite.

Spirit's Embrace is a Pandoneum Studio visual novel. It is being developed using Ren'Py and will be released for Windows, Mac, and Linux with mobile systems hopefully in the future.

The demo version of Spirit's Embrace for Android can also be found on Google Play.

is this like a otome where some charecters will have routes cause i think it would be really cool.

Hello! The game isn't an otome, though there will be some romance involved. The main goal is to explore one's inner self. The characters will have different routes depending on the choices you make.

How is the development going?

Unfortunately slowly. We have a two-man crew and no sponsors. The game is completed in about 30%. Hopefully, we'll be able to speed the production and complete the game by the end of this year.

I'm so sorry for your  lack of sponsors :( . I really love the concept of the game an am impatient to play it's full version But while you two are putting already so much into this, I don't want to trouble any of you. Though, still, I'm counting on you!!! Good luck with the game and the difficulties you each face each day!

Hi there! I'd love to play this game, but I am having issues installing it. I am using the itch.io app, and whenever I click install it says 'installing' for a moment and then stops. I am using a mac. Is there a way to work around this?

Hey, I'm not sure why it doesn't work. You can try downloading it manually from HERE  and then instaling it.

Tried doing so, I was able to download it but when I tried to open the zip folder I recieved an error message saying 'unable to expand Spirits-Embrace-Demo-1.2-mac.zip into 'Downloads' (error two - no such file or directory)

We checked out the mac version and zip file expands without any trouble. Make sure that you are not missing any files or the directory you are expanding file into exists.

ok so what age content will the game be

The demo version is for all ages.  Later in the game there will be mature content, no nudity and sexual themes though.

ok cool lol just checking because my younger cousin thought it looked pretty and wants to try it out as well when full version is out :'D

Wow! This has a hold on my interests! I would really love to see more! <3

This game seems very promising - the story is interesing so far, the characters are cool and the art is nice too. Though the demo is a bit too short for me to be able to really make a review or truly constructive feedback, I still have a question or two. Of course, there is no pressure in answering if for some reasons you'd rather not tell!

First, I'm curious about the type of story. I mean, I see the tags say comedy, fantasy and visual novel, but I can't deduce a lot from that. Will it be mostly an investigation focused only on finding the truth behind the main character's situation, or will it have more things to it? Or is it maybe a romance focused story where you pursue one character or another? Or a mix of the two? I can't very well tell only with the demo...

On another hand, I'm very intrigued when you say the main characters are bound to each other in a manner determined by the player. Does that actually mean both exist no matter who you choose at the beginning at the story, but as the game goes on you decide what links them? Like for example, they could have been siblings or lovers, or ennemies or whatever?

And also, will the story have only good endings, or also bad ones? It's always interesting to see bad endings in games, but not every dev likes to write that kind of things. And while I'm at it, bad endings are one thing, but the question includes game overs too - as in a sudden dead end or ending simply because you did a bad choice or failed something or whatever.

Hope you didn't mind the questions haha! Good luck with your project - I'll be following the progress!

Thank you very much for the feedback! ^^ It's much appreciated.  About your questions...

The story will mostly be focused on finding the truth about the main character's past. There will also be a romantic theme involved, but rather as a side-back story.  We plan to add some side quests to the main story ( like taking care of Fluffy - Shadow Master's dog ) and puzzle mini-games. The game is mostly a comedy, but you will also find a bit of tragedy and slice of life.

The two main characters, both Rin and Teo, exist within the storyline no matter who you choose at the beginning. They are bound to each other but that bond will be determined by the choices you'll make later in the game.

The story will have good, bad and neutral endings :) The bad endings won't be simply because a player made a bad decision, we promise there's more to it.

I see! Thank you very much! 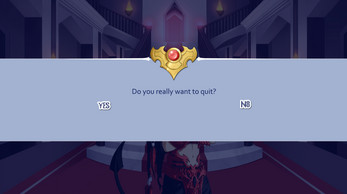 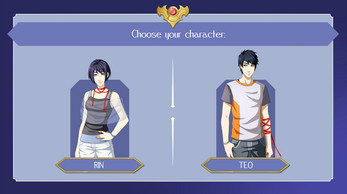 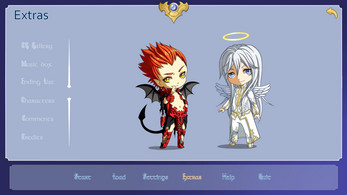 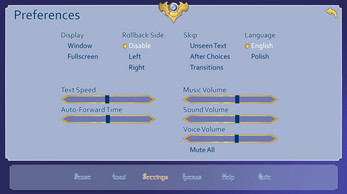 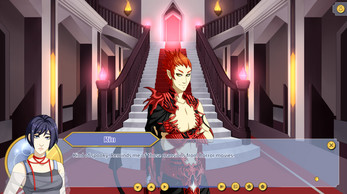 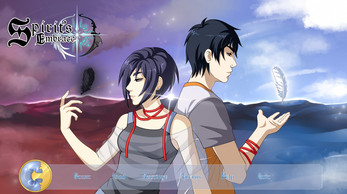 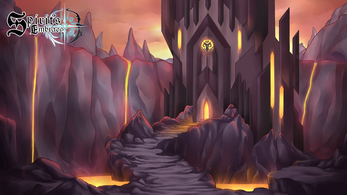 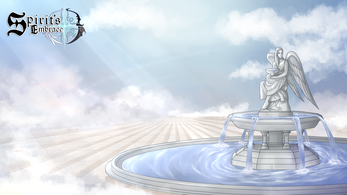 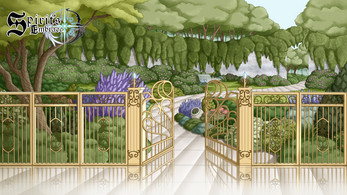